PRODUCT: A tool to increase interactivity between audiences and performers during a livestream.

GOAL: Create a way for performers to earn more revenue while increasing audience interaction. Allow audiences to have real time control over certain aspects of the performance.

TARGET AUDIENCE: Musicians who stream on Twitch 2-3 times per week.

CHALLENGES: The solution had to fit into existing livestreaming setups, and be flexible enough to allow performers to adapt the solution to their tastes.

I conducted interviews with livestreamers to understand pain points to alleviate through the design. I did secondary research on the various methods of monetization employed by performing artists of all sizes. I conducted interviews with audience members to learn the pain points they experience while watching a livestream.
​
I determined that STRETTO must become a two sided platform and identified two primary user groups. One side of the platform would prioritize music streamers seeking to increase interactivity during a livestream and earn revenue from streaming. The other side of the platform would prioritize viewers 18-30 who watch at least 2 hours of livestreams per week.

To allow prototypes to be fully featured, we made use of Resolume, a piece of mature software usually used by lighting designers and VJs for large concert venues. Audience members were represented by emojis and had agency to choose visual colors and effects by navigating around a virtual space.

After speaking with both audience members and performers, we learned that we needed to make STRETTO scalable and more interactive while maintaining the playful nature of the first prototype.

The next prototype allowed for far more users, and maintained the playful nature of the previous prototype. We also learned how to make STRETTO available to users anywhere in the globe.

​We conducted another round of user research, to decide the features we would include in our minimum viable product (MVP).

After conducting a competitive audit of software in the same space, we decided our MVP would be an extension for Twitch. This would immediately give us access to 140 million monthly active users, and let us keep development costs to a minimum by leveraging Twitch's developer-friendly API. 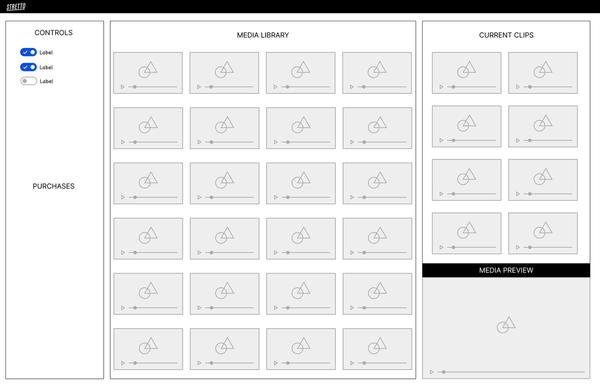 After ideating and drafting initial designs, I created an initial wireframe of the streamer interface that allowed for easy, fully customizable setup of unique streaming sets. The interface is a single-page web app. 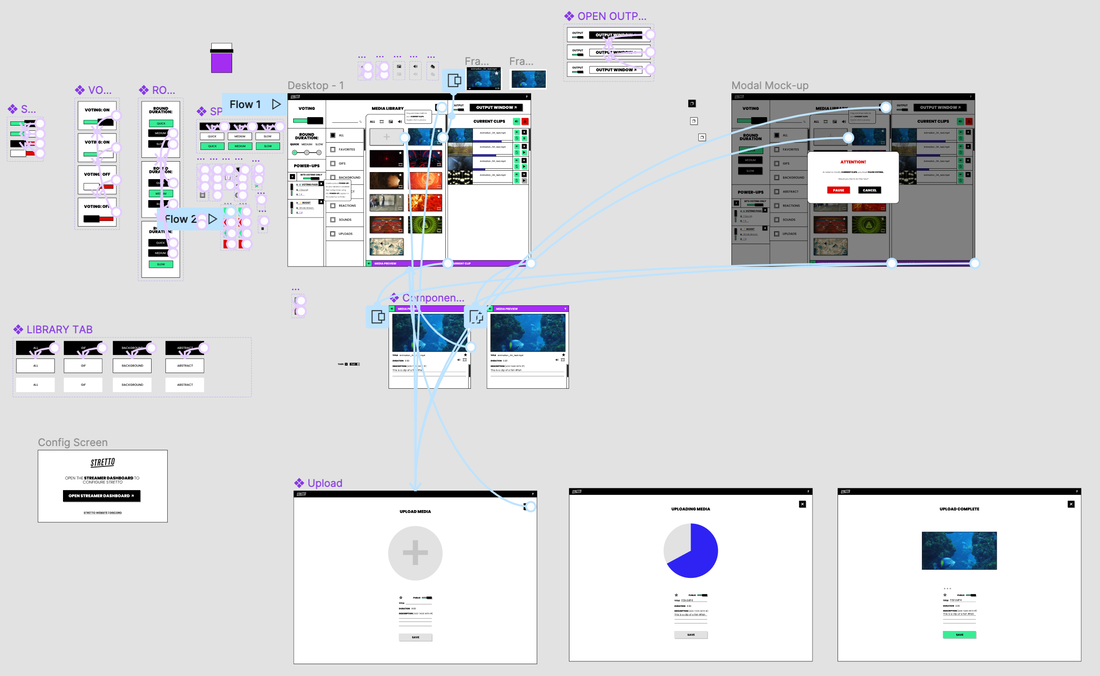 The STREAMER DASHBOARD allows livestreamers to easily choose any media file that their audience can vote on. Once the audience has made a decision, the media file instantly appears as part of the livestream.

The AUDIENCE PANEL appears as a hideable element over the Twitch video player. Audience members can easily choose content to appear in the stream, then quickly hide the panel to get it out of the way.